I am studying a short online course on Astronomy. It  is called "In the night Sky Orion" and I assumed that it would be only about that constellation, but it goes much deeper and wider than that.
We are introduced to the classification of different kinds of stars as well as different kinds of galaxies. We are told about black holes, dark matter and dark energy, We find out about the Big Bang Theory and the possible end of the Universe.

Learning about the Universe is both stimulating and daunting.  Although it is intended to be a very basic course, a lot of the more technical stuff is not all that easy to grasp and the huge size of the enormous distances and the length of the time involved is almost impossible for me to get my mind around.

I am enjoying the whole course, but one of the best parts is going out at the same time each night and observing Orion. We are supposed to take a photo of Orion once a week, but this is beyond me. Either my camera is not good enough or I am not using it properly, but all I get is a black space. So I just stand and stare at this group of stars in the sky and it is very beautiful. Although I haven't been able to get pictures of Orion  have been able to see that Orion has moved (relative to the earth, not the other stars) and is further overhead than when I started observations three weeks ago.

My Poem about Orion

In the constellation of Orion
somewhere halfway between
Red giant Betelgeuse
and White giant Rigel, lies
Orion Nebula, a fuzzy place, a womb
where stars are born.

As Orion sweeps across the sky,
his hunting dogs beside him,
chasing the Pleiedes, bow at the ready,
he carries below his belt the seeds
of suns. They swirl in multi-coloured clouds
of purple, yellow, green and blue.

In the wide disc which gathers round
a sphere that will become a new young sun,
are bits of debris, which, with dust
and ashes from celestial conflagrations
might form, after a million years
another Earth like ours
Posted by margaret clough at 12:51 PM No comments: 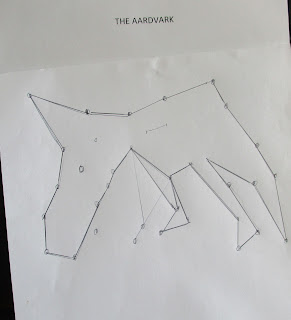 Here is a drawing of the constellation The Aardvark.  I downloaded the picture of the stars, made a tracing and then did the not very artistic drawing.

THE STORY OF THE AARDVARK

Kalulu the rabbit was speaking to King Lion. "O Great King," he said. "All the kings on this earth have beautiful palaces to live in, but you, one of the greatest of them all, still sleep under a scrubby thorn tree.  Why don't you have a palace built to show your subjects how great you are?"
"Who can I get to build me a palace?" asked King Lion.
"The ants are the best builders, " said Kalulu. "Just look at that big ant hill they have built. Shall I ask them to build a palace for you."
"Yes," said the king. "Tell them to build a palace fit for the King of all the Beasts." and he shook his black mane and gave a roar to show what a great king he was.
So Kalulu the rabbit ran off and informed the ants that  King Lion had ordered them to build him a new home and the ants called all their friends and relations together and  started to build at once.
Aardvark heard King Loin roaring. He went to see what was going on.  When he saw lines and lines of ants streaming to the place where the palace was to be built, he drooled with joy. He unrolled his long tongue and gobbled up all the ants. When King Lion came to inspect the site of his palace, he saw no building at all.
"What is the meaning of this, " he asked Kalulu.
""Please, O Great King," said Kalulu. " It is the aardvark's fault.. He has eaten all the ants that were going to build your palace."
King Lion was very angry. He grabbed  Aardvark by his tail and flung him high up into the sky. And there Aardvark is still. you can see him at night trying to gobble up the stars.