Canoeing
This evenng I noticed that my shoulders felt itchy. I rubbed them and some skin peeled off. What's happened to my shoulders? I couldn't make it out. Then I clicked. I haven't been swimming for years and among all the many things I had forgotten, I had forgotten what sunburn does. I must have got sunburnt when I was in a canoe on Sandvlei lagoon. Perhaps forgetting that incident was rather Freudian. I hardly covered myself in glory that day. In fact it was  rather embarrasing.

My friend, Geri had been promising me a canoe ride for some time and last Monday when I gave her a lift back from Writing class she suggested I come and have lunch with her. It was a perfect day, not a cloud in the sky and just a slight soft breeze to ruffle the water .  Geri took me to a little wooden jetty where a canoe was moored. It was small but solid and stable. She held it still while I scrambled into it. While Geri prepared lunch and set a table out on the patio overlooking the water I set out for a paddle round the vlei. I didn't want to go too far so I went upstream towards a  little bridge instead of taking to the main stream of the river.. I was delighted to find that I had not lost my canoeing skills. The canoe glided smoothly over the water. I watched weaver birds building nests of grass and saw a yellowbilled duck with a family of ducklings only a few metres away from my boat. There were numbers  and numbers of coots  amonst the reeds. I let the canoe drift gently towards the opposite bank of the creek.  I could have stayed there all afternoon, but I didn't want to go too far, so I turned the canoe and started back. Up to then I had been drifting with the current, but now I was paddling against it.  What is more, the wind had got up and was blowing the canoe backwards.  I battled manfully, but made very little progress. In fact I seemed to be going round in circles. My arms were aching and I was tiring fast.  I was never going to make it back to Geri's house. Instead I  just gave up and let the wind carry me to the shore. I was able to guide the canoe onto a slipway where I could get out easily. Then I rang Geri on my cel phone and gave her the sad news. She walked along the road until she located me. We didn't know what to do. We didn't want to leave the boat, but neither of us was strong enough to get it back home.  But Geri was resourceful. She approached two men, I think they were builders on their lunch break, and offered them R10 to take the canoe to her house. They were quite willing. So while they travelled by water, we ran along the road to get there first and wave them to the right jetty.

I really enjoy canoeing, but am going to let Geri get over this escapade before I approach her again. Next time I shall go in the opposite direction so I can let the wind blow me home.
Posted by margaret clough at 1:05 PM No comments: 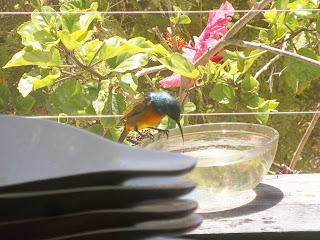 Posted by margaret clough at 10:59 PM No comments:

The latest trend: writers becoming a celebrities of the type and calibre of Madonna or Bieber.  Authors like Rowlings and Junot and the Green brothers, are mobbed at book signings and revered like pop stars.  This kind of hysterical reaction by adoring fans tends to be scorned by the serious "literary' author, but the truth is that the days of the shy retiring genius scribbling in an obscure attic and known only by his or her writings is gone forever. Today self promotion is the name of the game.
Anyone embarking on a literary career would probably do better to take a course in advertising or public speaking rather than a degree in Eng.Lit or Creative Writing. Looking good and talking well is what is needed to sell your product.

Facebook, Twitter etc. are probably to thank for this state of affairs. It is incredible to me how, in my lifetime, first computers and then the Internet has changed the world. Dire profesies about the demise of books and the loss of the ability to read are just not being fulfilled. It seems to me that people are reading and writing more not less. They are just doing it differently and more publicly.

Being forced to sell oneself  as well as what one writes may be hard on modern authors, but like most readers I find it interesting to get to know the personality behind the books that I enjoy. Getting out in front of one's readership is just something that modern writers have to come to terms with.

I must say, having listened to the recordings of some poets, even famous ones, reading their works, I have thought that the odd lesson in what used to be called "elocution' when I was at school would not have come amiss in their early education.

Posted by margaret clough at 7:07 AM No comments: