So I am not as famous in Macgregor as I thought. I have just received an e-mail to let me know that they are willing to let me read my poems at their festival as long as I do it at my own expense. I do understand that they want to spend their money on poets that carry more weight in the literary scene -- poets that everybody has heard of like Antjie Krog or the poets who have won prizes. Nevertheless, I shall decline their invitation. I do intend going to the festival, but if I have to pay for the petrol to get there(and it is rather a long way) and pay for my room at a B and B and for my meals at restaurants in the village, then I want to enjoy myself and not have the stress of having to perform for an audience not to mention all the hard work that goes on beforehand of having to prepare a presentation that will appeal to fussy festival-goers. Also, I would like to see the programme before I commit myself to all the hassle of organising to go away( trying to get lifts or someone to help drive, getting a house sitter, letting the people at church and the people at the dog club know that I am not available on that weekend etc.)
I shall answer the e-mail and tell them so.
It  has also occurred to me that it might be possible to combine the trip with a visit to my daughter in the Eastern Cape.  But that might mean driving by myself.

Posted by margaret clough at 2:12 AM No comments:

At a recent literary party we had a number of  poets reading their work. One of them, I am afraid I don't remember her name, read a long and impassioned tirade about her Slave ancestors. Why, I wondered,did this annoy me and make me uncomfortable. Thinking about it I realise that it is because poems like this are intended to make pale people like me feel guilty for having slave-owner ancestors. Yes, indeed I did have ancestors who lived on St Helena and were owners of slaves, and most unsavoury characters they were too. I have recently been researching them on Google and have been quite shocked at what they were capable of. But what my researches also turned up was that not all my forbears were lily white. Some of them were definitely rather dark of complexion and must have been the offspring of black African slaves. So now I can also lay claim to slave ancestors and I can stop feeling ashamed and get all indignant instead. And, come to think of it, the poet in question, was not nearly as dark as the West Africans that were brought into the Cape in the early days. Could she carry in her veins the blood of  at least one wicked Slave owner? How much of that evil person's nature did she inherit? Shouldn't she also feel shame?

Posted by margaret clough at 12:22 PM No comments:

Yesterday I attended the AGM of the False Bay Diocese AWF. I looked upon my presence at this event as something of a duty, but found it unexpectedly enjoyable. Th main reason, I think, was being in the company of such very nice people. We are very blessed in our little congregation. I am so glad that circumstances brought me to All Saints Muizenberg. No, not circumstances, it was the Lord who led me to this small friendly parish and I am very grateful to Him.

Our Bishop, Margaret Vertue, gave the address and her theme was the need to combat the scourge of Gender  abuse. Of course the abuse of women is a bad thing. Of course we should be fighting it. But what can I do in my specific situation. I know our branch is involved in providing trauma packs at the local police station for victims. That is helping, but in a small way. Some people I know are involved in counselling, but that is not really for me. I did, of course, come into contact with abused women when I was a member of Alanon, but I don't want to go back to that. I haven't been close to the problem for such a long time that I can no longer make much of a meaningful contribution at meetings. Thinking it over, and now putting my thoughts into writing, I have come to the conclusion that making a financial contribution to an organisation like Rape Crisis is probably the best way for me. I know that throwing money at a problem doesn't necessarily solve it, but Rape Crisis does excellent work and, I believe, gets very little funding. The fact that this is easy for me to do does not mean that it is not worth doing. I think rape Crises is on my internet banking page as a beneficiary. I must go and check this and then organise a regular contribution.

Posted by margaret clough at 12:43 PM No comments:

A few months ago I was introduced to the wonderful world of the MOOC.  The first one I attempted was the delightful Modpo. (Modern American Poetry) Then just to show that I am serious about my career as a writer, I studied English Grammar( Crafting a more Successful Writer) and finally, and this is the one I have enjoyed the most, I did a course on Linguistics (The Miracle of Human Language) It turned out to be far from being the dry-as- dust subject that I had always considered it. This course was enthusiastically conducted by the charming Hollander, Marc Oostendorp, and I found it fascinating. I feel quite lost now it has come to an end. Why don't I start another course? I think I need to go though a period of mourning and withdrawal first. If I start another immediately I won;t be able to prevent myself from comparing it to the Human Language one and might not be able to give it the dedication and attention it deserves. These three courses are all part of the group called Coursera. I understand that there are a number of other organisations that offer free online opportunities for study, but Coursera has a very wide variety and they are all of a high standard.
Posted by margaret clough at 7:22 AM No comments:

Dogs have featured largely in my life lately. I have had a very doggy weekend at the Western Cape Agility trials with Luke's Jack Russell, Beemer. I didn't run him myself. I am lucky enough to have a good friend, Yolande, who is an excellent handler, to take him round the courses. It was a very good weekend although he only managed one medal. But the overshadowing event lately was the death of my old dog, Dipstick. She was the first dog, actually the only dog, that was my very own. All my life there have been dogs in my home, but they were never really mine. When I was a child, whatever  dogs we had. attached themselves firmly to my mother. Even though my parents said they had bought them for me, they never took much notice of me. After I was married, all our dogs gave their allegiance to my husband, the Alpha male in the household,  It didn't matter that I often fed them, that I walked them and groomed them daily and was the one who took them to the vet for their check-ups and shots, he was their lord and master and I came a very poor second. 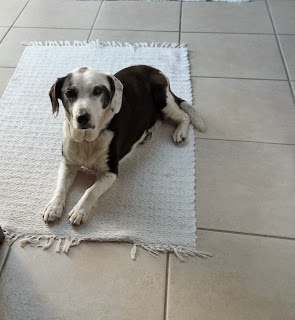 So it was that Dipstick, who came to me after Mike died, was very special. She was not demonstrative, she would greet me with a casual wave of the tail when I came home, but she always knew she was mine. She liked to be close to me. Whatever room in the house I happened to be in, she would be there too.  She would never go walkies with anyone else, even friend or family members that she knew well, unless I told her to do so, and then she would go very reluctantly.  She would walk nicely to heel with the other person, but look back often to see if I wouldn't change my mind and come too.

It is now more than ten days since she died. They happened to be very busy days, which has perhaps been a good thing. But now I am really missing her. Little, Jack Russell, Beemer seemed, at first, to be almost more affected than I was. He was off his food and rather distracted during the show last weekend, Now he seems to be back to normal, but I have been sad and depressed all week. It is only now that I can bring myself to write about my old dog. She was a great companion and we had so much fun and so many adventures together. I know  have been blessed in having had her company for so long. No other dogs we have had, have lived as long as sixteen years. She was getting rather slow, but looked good and was in good health until the day before she died. Poor old girl, she had a severe stroke and by the time I realised how bad she was and Luke came to take her to the vet, she was only semi-conscious and didn't really know what was happening.
Posted by margaret clough at 11:23 AM No comments: