MOONBEAMS
“Moonbeams, sadly, will not survive in a jar.”
Roger Mc Gough

Dark shadows will chase sunlight
from a windowsill. Rainbows
have no anchors and they float away
Fires consume dry grass, turn bush to ash.
Plucked flowers lose their petals one by one.

But stars, long dead can still shine on.
Their rays, far from their source speed through space
to reach us as we stand here in the night,
hold hands and look up at the sky 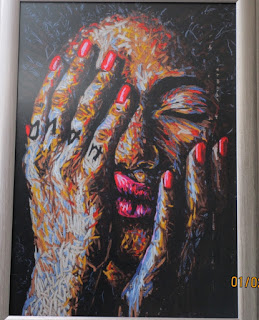 I look across my room to where
a new embroidered picture hangs,
a picture of a girl, dark-skinned, red-lipped
head held in tattooed hands.
Coloured threads
laid down like painted brush-marks
show her sorrow.
Stitched into the cloth I see
exquisitely expressed,
the compass of her pain.

And I see
Another girl, blond head
bent over wooden frame. She holds
in delicate fingers a sharp shiny needle
and stabs into a canvas cloth

over and over again.

Posted by margaret clough at 12:40 PM No comments:

My attention was drawnrecently to an article about poetry. Two poets were mentioned, Goldsmith and Prynne and I looked them up.  These poets were apparently considered very important and influential. Examples of their poems were supplied by Google. One of the poems (I think the author was Goldsmith) was made up of of every sentence in a particular issue of a newspaper written down one below the other. Apparently this is some kind of experimental writing and, I think, is known as unoriginality.  Prynne's poems did look more like poems. They were written in stanzas. The lines were fairly even. They sounded pleasant when read aloud. But I after reading one of them several times carefully, I still had not the faintest idea what it was about.

Now, I am quite ready to accept that my lack of appreciation is due to inadequacies in my knowledge or my understanding, but I am sure that the average reader (not very many of them these days) who chooses to read poetry would feel the same. What is the audience for this sort of modern poetry. Obviously academics teaching and studying modern literature must read them, but who else enjoys them?

Nearly all my friends and acquaintances, when I mention Poetry will immediately tell me that they never read poetry and that poetry is something that they don't understand. I think all this obscure kind of modern poetry is to blame Most people these days  view poems as though they are not to be read for enjoyment, but are like cryptic crossword puzzle clues that have to be dissected and pulled apart. This is the usual attitude in this country towards written poetry. And it is a pity.

Performance poetry, on the other hand is becoming very popular. There are more and more events for Praise Poets and Slam Poets. Hopefully this popularity will spill over to poems that can be read as well as listened to.

Posted by margaret clough at 12:01 PM No comments: